"CSPs must understand the implications of the Kubernetes ecosystem for 5G software development and deployment or risk being unable to take advantage of the ‘full’, cloud-native 5G network vision."

Kubernetes is the fulcrum of an open-source, cloud-native ecosystem that underpins 5G software development

The ‘full’ 5G network vision requires a horizontal separation between the 5G network’s software-based features and functions (such as the 5G standalone (SA) core and software-based components of the radio access network) and the cloud infrastructure that they run on. To fulfil this vision, 5G network functions must use the same ‘cloud-native’ architectural principles, DevOps tools and technology stack as modern IT applications. The cloud-native 5G network therefore becomes a ‘super-application’ in which all of its software components – including cloud-native network functions (CNFs), cloud-native operational capabilities and associated cloud-native IT services – can be orchestrated together as a single entity to deliver 5G networking functionality. This 5G network super-application will run on elastic, cloud-native infrastructure that will be ubiquitously deployed across central, regional, metro and far edge locations.

5G as a cloud-native application will have unprecedented strengths

To fulfil this potential, the 5G network-as-application will need a different execution environment from first-generation virtual network functions (VNFs) that execute in virtual machine (VM)-based clouds. Modern, cloud-native applications execute in lightweight container technology controlled by an orchestrator. The open-source development Kubernetes (K8s) is rapidly becoming the de facto standard for container orchestration under the auspices of the Cloud Native Computing Foundation (CNCF), and all public cloud and private cloud technology providers support K8s-based container-as-a service (CaaS). CaaS is expected to replace VM-based infrastructure-as-a-service (IaaS) cloud technologies (such as OpenStack) over the next decade.

Any containerised workload can ‘plug’ into K8s orchestration, including common, reusable software components (‘middleware’) that all cloud-native applications can draw on. These include observability, security, search and analytics, service mesh, continuous monitoring/continuous deployment and database functionality that developers do not want to reinvent every time they write code. K8s is becoming the fulcrum of a growing ecosystem of open-source, cloud-native tools and projects that are aimed at managing cloud-native infrastructure (CaaS) and the application lifecycle (ALM) of the software that runs on it.

Although the CNCF/K8s ecosystem is vast, application developers (including network equipment providers that are developing CNFs and B/OSS players that are replatforming software products as cloud-native microservices) are choosing a subset of ecosystem functions as the foundation for their cloud-native applications. These vendors’ curated sets of K8s-orchestratable CNCF ALM plug-ins are, in effect, platforms-as-a-service (PaaS) on top of which they build their own, differentiated software (see Figure 1). There is a high degree of conformance between different vendors’ cloud-native PaaS because the ALM plug-ins all come from the same CNCF/K8s ecosystem pool.

Figure 1: An overview of the cloud-native technology stack architecture

CSPs with plans to adopt ‘full 5G’ will need to understand the K8s ecosystem and its impact, both as deployers of 5G cloud-native software products and potential developers of new functionality, such as digital services or custom extensions to vendor software. The cloud-native approach to software development and K8s technology have been pioneered by hyperscale companies: both are unfamiliar to CSPs and need to be aligned with their needs. The tools and projects in the K8s ecosystem are also immature. They are not yet ready for the carrier-grade operational demands of a full 5G network, although operator-driven initiatives such as the Telecoms User Group within CNCF and the newly renamed Cloud Infrastructure Telco Task Force (CNTT) that is supported by the Linux Foundation should help to address their shortcomings from a telecoms perspective.

Since every cloud-native software vendor uses a similar set of CNCF/K8s plug-ins, CSPs face onboarding multiple vendor CaaS/PaaS-based implementations of those components with their selection of CNFs, B/OSS and IT applications. Leading CSPs would like to rationalise this middleware landscape by mandating, in the first instance, the CaaS environment that all vendors should deploy to, and in the longer term, potentially specifying PaaS components too. However, this introduces complex support issues and, for the time being, CSPs will have to contend with multiple different PaaS/CaaS deployment models as shown in Figure 2.

Figure 2: CSPs will host multiple PaaS/CaaS deployment models, an approach which has implications for support 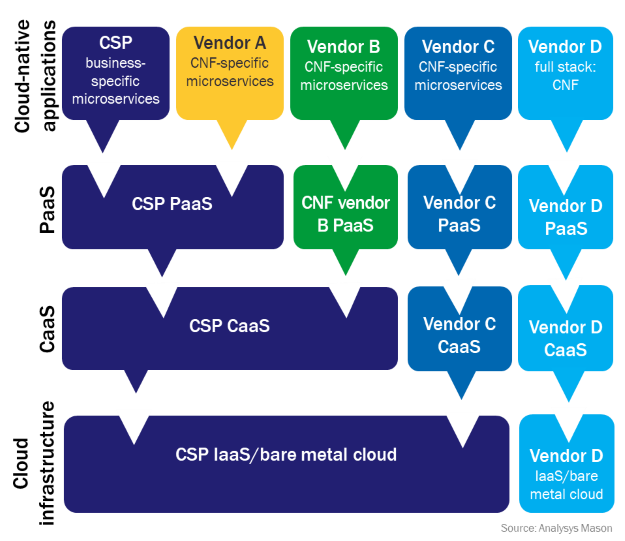