"The logic of Palo Alto Networks buying an SD-WAN technology firm is clear; the surprise is that it did not happen sooner."

Palo Alto Networks announced its plan to acquire the SD-WAN firm CloudGenix for USD420 million on 31 March 2020. The deal marks a change in strategy for Palo Alto Networks, which had previously been developing SD-WAN internally. The CloudGenix purchase is recognition that Palo Alto Networks needs to move faster if it is to catch up with other players (especially its direct competitors in the firewall market) that have had commercial SD-WAN propositions for longer.

CloudGenix’s motives for selling are uncomplicated. Other SD-WAN firms (such as Cisco, Fortinet, Nokia and VMware) all have more money and customers, as well as established routes to market. CloudGenix’s investors will be happy with the valuation. The price is similar to the amount paid for other SD-WAN technology companies (VMware bought Velocloud for USD449 million and Cisco paid USD497 million for Viptela), despite the number of potential buyers being somewhat limited.

The deal is a further sign that SD-WAN is now a feature of firewalls (or vice versa, depending on your perspective) rather than a separate product category; an integrated SD-WAN and firewall solution from a single vendor is becoming the default, especially for mid-market deployments. A strong SD-WAN product is important to help Palo Alto Networks to thrive in the longer term.

Palo Alto Networks has been slow to embrace SD-WAN

Palo Alto Networks seems to have underestimated the speed of the shift to combined firewall/SD-WAN products. It only launched its first (internally developed) SD-WAN product in December 2019, long after rivals such as Cisco and Fortinet.

Its stated target market is the largest 2000 enterprises worldwide, and these firms may want to source best-of-breed SD-WAN and firewall solutions separately. However, Palo Alto Networks’s actual customer base, of over 70 000 organisations, is far more diverse and may prefer combined solutions. Even the largest firms may opt for an integrated box too, as these solutions become more sophisticated.

Palo Alto Networks is under investor pressure to do more with SD-WAN. It reduced its guidance for 2020 revenue by USD90 million in February 2020; the lack of a strong SD-WAN product is possibly damaging sales. The lowered guidance caused its share price to drop by 20%, and the COVID-19 outbreak led to further falls. Palo Alto Networks’s share price is now 30% lower than it was on 1 January 2020, representing a greater decline than its competitors’ (Figure 1). 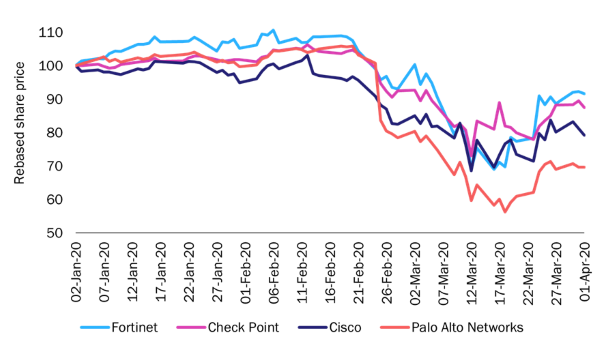 The prior reluctance of Palo Alto Networks to buy an SD-WAN technology firm is more surprising given its strategy of making ‘tuck in’ acquisitions. It also has plenty of cash (over USD3 billion at the end of its most recent quarter) and has made several other purchases recently (Figure 2). Many of its competitors (including Cisco, Nokia and VMware) have used acquisitions to gain SD-WAN capabilities.

The integration of CloudGenix should be rapid

Palo Alto Networks will be looking to integrate CloudGenix with its line of Prisma Access firewalls quickly. The deal should close by August 2020 and the first product integration milestone should be complete “within 3 months of closing.” Even before then, the sales teams will start selling CloudGenix alongside existing products, a configuration already used by some customers.

Palo Alto Networks will also continue to develop its existing internal SD-WAN product. The long-term positioning of the two SD-WAN solutions is not clear, but CloudGenix will probably be offered as the advanced solution, and the internally developed solution will be used for simpler networks. Palo Alto Networks will need to consider interoperability between the two SD-WAN solutions; Cisco attracts criticism for its two solutions, Meraki and Viptela, not working well together.

Customers will be receptive to SD-WAN from Palo Alto Networks

Fortinet’s initial success with SD-WAN came from direct sales and through MSPs, but it has recently successfully won contracts with operators. GTT, Ooredoo, Orange Business Services and Telenor have selected Fortinet since September 2019. Fortinet had 21 000 SD-WAN customers by December 2019; Palo Alto Networks clearly has some catching up to do. However, operators are still adding new SD-WAN suppliers meaning that Palo Alto Networks is in a good position, particularly given its strong reputation.

It seems unlikely that the COVID-19 pandemic will accelerate adoption of SD-WAN, and this may help Palo Alto Networks. IT departments are currently scrambling to solve problems relating to working from home rather than improving connectivity to empty offices. They are likely to at least postpone any major changes, such as adopting SD-WAN. Hardware availability will also be limited through much of 2020. This delay could work in Palo Alto Networks’s favour, because it gives it more time to develop its own SD-WAN propositions.

The success of combined SD-WAN-plus-firewall solutions among enterprises happened more quickly than Palo Alto Networks had expected, and the lack of a suitable product resulted in a loss of sales and investor confidence. The results of this latest acquisition will not be seen until late in 2020 and Palo Alto Networks is hoping that this is not too late.