"There is an implied ARPU uplift for customers that are migrating from 4G to 5G for each of the South Korean operators."

The three South Korean mobile operators, KT, LG U+ and SK Telecom, were the first operators in the world to launch mobile 5G services. They all launched their services on the same day in April 2019, just hours before Verizon in the USA. Many other 5G mobile services have since been launched around the world, including in USA, China and several European countries, but the South Korean market gives industry observers a first view of the effects of a relatively large-scale launch on a customer base. This comment focuses on the revenue impacts of launching 5G based on an analysis of the South Korean operators’ reporting after two quarters of service (that is, in 3Q 2019). It does not address the related issues of investment and profitability.

5G penetration reached 5% after two quarters, and the ARPU for all three operators increased

There were nearly 3.5 million 5G subscribers in South Korea in 3Q 2019; this represented 5% of all wireless subscriptions in the country. Market leader SK Telecom accounted for over 1.5 million 5G SIMs, giving it a 5G market share of 44%. Challenger LG U+ had a 25% 5G market share, ahead of its overall mobile share of 20% (including MVNOs). All three operators are bullish about how adoption will increase in 2020 as the range of available 5G devices widens. For example, SK Telecom is aiming to have 7 million 5G subscribers by the end of 2020, which would equate to around 30% of its mobile handset customer base. KT is also targeting 30% 5G penetration. This is very aggressive in the context of a mature smartphone market and lengthening handset replacement cycles, but operators in South Korea appear to have an appetite for device subsidies that is seldom seen in other countries.

Mobile ARPU in South Korea was under sustained pressure prior to the launch of 5G services, and it declined consistently throughout 2018. The year-on-year growth rates in 1Q 2019 were –8%, –2% and –7% for SK Telecom, KT and LG U+, respectively. However, all three operators reported ARPU growth in 2019 (Figure 1) and directly ascribe this increase to the launch of 5G. SK Telecom’s ARPU grew the most: it increased by 1.7% between 1Q 2019 and 3Q 2019. LG U+ reported the lowest ARPU growth of the three operators (0.5% increase). 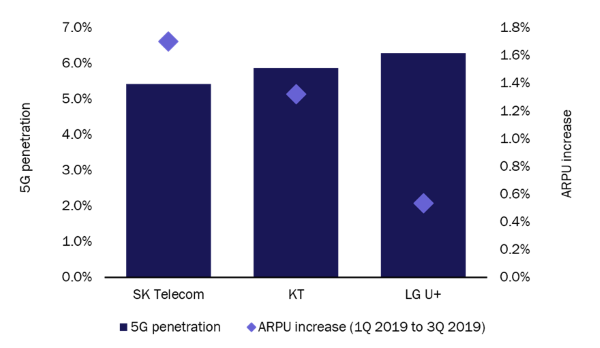 All three operators reported on earnings calls with investors that they expect ARPU to continue to grow in 2020 as 5G penetrates the customer base further. These expectations suggest that there is little appetite for a price war in a bid for market share, though the operators may collectively face pressure from the government to reduce customers’ bills. Subscriber acquisition costs have been high and none of the operators can afford to increase marketing costs any further. Indeed, SK Telecom reported that its marketing expenses were 27% of its revenue in 3Q 2019; this figure was 24% for LG U+. Operators will be under pressure from investors to improve their cost structures in 2020, despite claims that competition will not intensify.

The South Korean operators are claiming that 5G is helping them to realise additional value from customers (though the 5G customer base is formed solely of early adopters at this stage). KT has stated that its ARPU gains are largely due to “acquiring quality subs with higher ARPU contributions.” KT’s high-value 5G tariffs are more expensive than its high-value 4G tariffs, and the operator claims that 80% of its 5G customers have signed up to plans that cost KRW80 000 (USD68) per month or more. Similarly, SK Telecom has reported that “most” of its 5G customers subscribe to either its ‘Standard’ or ‘Prime’ price plans. LG U+ reported that 5.7% of its total customer base was on plans that cost KRW80 000 or more in 3Q 2019. The reported KPIs support this view that customers spend more when they migrate to 5G. The implied uplift in spend on a per-customer basis for SK Telecom is 31%, all other things being equal. (This assumes that the entire ARPU increase can be simply attributed to the 5.4% of customers that upgraded from 4G to 5G between 1Q 2019 and 3Q 2019.) The figure is similar for KT (23%), but is lower for LG U+ (9%), which is pushing harder for market share.

Operators are also reporting significantly increased data usage with 5G. The MSIT stated that the average monthly data consumption for 5G customers in November 2019 was 26.3GB compared to 9.5GB for 4G customers. However, we must be cautious of an early-adopter bias. SK Telecom reported in September 2019 that customers that migrated from 4G to 5G increased their usage by an average of 65% on a like-for-like basis. This increase is primarily due to a quantitative change in consumption: an improved quality of experience leads customers to do more of what they were previously doing. For example, higher data speeds may encourage users to spend more time consuming video, and higher-specification video standards may lead to further increases in data consumption. In South Korea, increased data usage could also be due to a qualitative change in consumption: higher-performance networks support the use of new types of content and services. These include additional features to enhance the video experience such as multiple viewpoints and 360 content, or new services such as VR gaming. SK Telecom has commented that AR/VR traffic is growing very quickly (albeit from a low base at this stage), and that the majority of the traffic growth that is associated with 5G has come from video.

The widespread adoption of unlimited data packages in South Korea (all the higher-end 5G plans are now unlimited) means that operators will be unable to directly monetise increased data usage for many of their higher-value subscribers and will increasingly be reliant on new content and services to differentiate tiers and support upsell. South Korean operators are expected to focus on migrating their existing 4G customer base to 5G, though they are unlikely to be able to maintain the existing levels of ARPU uplift as 5G adoption becomes more commonplace.