"BT’s recent shift in strategy will enable it to increase its convergence base."

BT has historically adopted a multi-brand strategy, which has restricted convergence

BT had a convergence strategy in place prior to this announcement but it has had little success. The number of reported convergence accounts have grown slowly, and both BT Mobile and EE broadband have failed to establish significant market share. BT reports that only 21.5% of all its customers are converged as of 4Q 2021, and this has grown by less than a percentage point in a year, with average revenue generating units (RGUs) per address similarly flat over this period.

Converged operators do not always employ unified branding strategies (for example, VodafoneZiggo retained both the Vodafone and Ziggo brands following their merger in 2017). However, a unified brand ensures that FMC offers are coherent and easier to understand for consumers.

It makes sense for BT to choose EE as its primary brand: the BT brand is the legacy incumbent brand and is trusted among an older demographic, but it is not as future-proof as the EE brand, which is marketed as a digital brand. BT’s latest announcement also referred to the launch of innovative new services beyond connectivity, and the EE brand is well-positioned to deliver such services. Moreover, according to our 2021 consumer survey,1 the EE brand has among the highest Net Promoter Score (NPS) – and the highest network coverage satisfaction scores – of any flagship mobile network operator (MNO) brand in the UK. EE’s high network coverage satisfaction scores therefore make it a logical brand to use to cross-sell FTTP connections, which is a core objective for BT Group. The BT fixed broadband brand also trails EE’s fixed broadband brand in NPS and speed satisfaction. 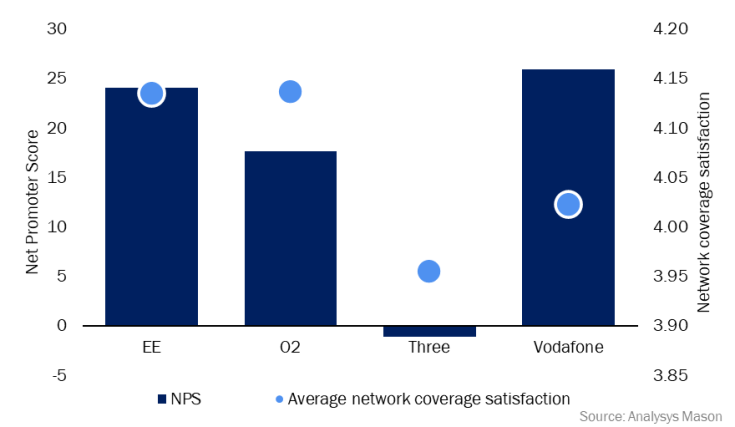 Fixed–mobile mergers also offer cost savings benefits associated with operating a single brand rather than multiple brands: overall costs savings generally account for double the revenue synergies associated with these deals.3 BT has retained all the fixed and mobile brands it operated before the acquisition of EE, which will have limited the operating cost synergies it has been able to achieve to this point. Although BT may continue to exist as a peripheral fixed brand, it is likely that BT Mobile will be retired.

BT’s announcement will result in increased convergence in the UK

Following the announcement, BT will likely move towards using the EE brand to build its converged subscriber base. The EE brand has around 20% mobile market share, with 35% of these customers currently subscribing to a BT Group broadband service. The potential for cross-selling fixed broadband through the EE mobile brand is therefore strong, particularly if superfast speeds are emphasised. If customers of BT-branded fixed broadband can be migrated onto the EE brand, EE mobile customers could also be given service bonuses (such as speed boosts or mobile data bonuses), which could lower churn.

This announcement increases the pressure on standalone players going forward, particularly as VM–O2 is increasingly emphasising its own FMC strategy. These strategic shifts could lead to further fixed-mobile mergers and acquisitions. Although standalone FTTP challengers may have success in the short term due to their initial local network superiority, the BT announcement increases the likelihood of these players being acquired by an MNO in the coming years.

BT’s decision is the correct one, but some issues remain

The trusted status of the BT broadband brand suggests that it still has some role to play. If customers are migrated onto the EE brand, BT must ensure that it does not alienate long-term subscribers who may be unfamiliar with the EE brand. If customers are not migrated, the synergies associated with unified branding will not be realised in the same way. There are also questions around BT’s pay-TV branding: EE currently does not offer traditional pay-TV services and must decide whether to offer triple-play (or quad-play) packages in the same way that the BT brand has.

The lack of an integrated incumbent has held back convergence in the UK market. BT’s announcement will result in an acceleration of convergence growth, with converged accounts representing an estimated 40% of all fixed broadband accounts in the UK by 2026 (see Figure 2).4

2 As part of Analysys Mason’s consumer survey, respondents were asked to rate their satisfaction with network coverage on a scale of 1–5. We take a mean of the customer scores associated with each of the MNO flagship brands.