5G, edge and automation will drive CSP spending on digital infrastructure to reach USD53.7 billion by 2023


"CSPs will spend USD209 billion during 2018–2023 on building digital infrastructure that will consist of multiple clouds, using a mix of private NFVI, SaaS, public and hybrid cloud models."

Communications service provider (CSP) spending on digital infrastructure (including network function virtualisation (NFV), cloud computing and software-defined networking (SDN)) will grow from USD18.1 billion in 2018 to USD53.7 billion by 2023, at a CAGR of 24%. This comment provides the key highlights from our report, Digital infrastructure: worldwide forecast 2019–2023,1 and examines the trends and factors driving this market.

Contrary to what some industry voices claim, NFV is far from dead. There was a significant increase in the number and scale of NFV deployments in 2019, particularly in the mobile core domain, where NFV spending grew by 66% year-on-year between 2018 and 2019. vEPC spending was strong due to 4G capacity upgrades and 5G preparations. 5G will rely on IMS/VoLTE for voice services, and the resulting renewed demand on VoLTE is driving an increase in the number of vIMS deployments. CSPs’ interest in enterprise vCPE/uCPE services spiked in terms of requests for information (RFIs)/requests for proposals (RFPs) during 2019 after a slow start, because CSPs started to overcome the related technical and operational challenges. We expect that this will translate into robust growth in CSP spending on these services in 2020. NFV started to be used in the RAN, as exemplified by Rakuten and Verizon. This was supported by the contributions from industry initiatives such as TIP and O-RAN.

It is true that the current status of NFV networks is not exactly what the industry had envisioned when NFV was first launched because the majority (73%) of these networks are still siloed ‘virtual boxes’ that rely on manual processes and the same management systems as physical boxes.2 However, 2019 marked a major change. We are seeing a steady movement towards common, horizontal NFV platforms, led by AT&T, Etisalat, Rakuten, Telefónica, Telenor and Zain. Moreover, the next wave of NFV platforms (that is, cloud-native technologies and ecosystems) are emerging with the promise of delivering the desired automation, scalability and cost-efficiency benefits of true cloud infrastructure.

5G will be the primary driver of NFV deployments in the next 5 years and will necessitate investment in cloud-native network functions (CNFs)3 and vRAN. However, these technologies are still relatively immature, their pricing and commercial models are uncertain and their large-scale commercial adoption will take time. We expect that these technologies will start to affect NFV spending patterns after 2023; we developed a high-level forecast (Figure 1) based on industry expectations and technology maturity to illustrate these shifts in mobile capex.

Figure 1: Penetration of the total addressable mobile market for NFV by VNFs, CNFs and PNFs, 2018–2025 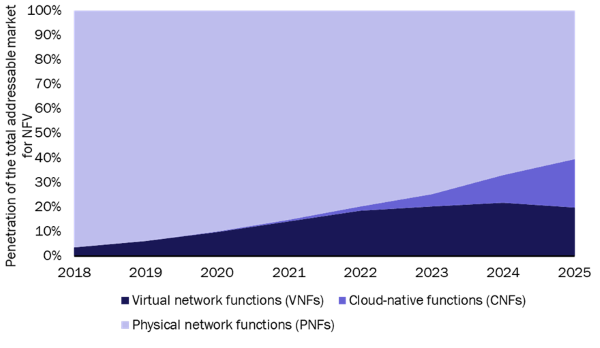 CSP spending on cloud computing will grow to USD19.1 billion by 2023 and will be affected by multi-cloud, SaaS, 5G and edge opportunities

CSP spending on cloud computing (which includes CSP cloud spending both as users (CSP internal cloud) and as service providers (CSP enterprise cloud)) will grow at a CAGR of 11.1% to USD19.1 billion by 2023. The growth in the CSP cloud market will predominantly come from internal cloud spending (CAGR 18.3%) thanks to the increasing virtualisation of IT/OSS/BSS applications and the adoption of public and hybrid clouds and SaaS models.

CSPs’ close co-operation with public cloud providers (Amazon Web Services (AWS), Microsoft Azure, Google Cloud Platform (GCP) and IBM) has grown significantly over the last few years. For example, AT&T, Three UK and Vodafone announced that they are moving non-network, IT workloads to public clouds. Some CSPs are also considering extending their partnerships with public cloud providers (AWS Wavelength, Google Anthos and Microsoft AzureStack) to benefit from their advanced cloud technology and developer ecosystems when delivering cloud services to enterprise customers in the areas of 5G, edge computing, IoT and other B2B services.5

Overall, CSPs’ digital infrastructure will consist of multiple clouds including 5G core, RAN, edge and IT clouds, which will be built using a mix of private NFV/telco clouds, public clouds and hybrid models.

CSP spending on SDN will reach USD10.4 billion by 2023 because SDN will play a key role in automation across multiple CSP clouds

Analysys Mason forecasts that CSP spending for SDN (including both data centre SDN and WAN SDN6) will grow to USD10.4 billion by 2023. The growth in the size of CSPs’ NFV, cloud and enterprise services investments, and the increasing automation and programmability needs across the WAN and multiple CSP clouds (including NFV/cloud data centres) will lead to a strong growth in spending (CAGR of 33.4%).

Open networking/network disaggregation is an emerging trend in this market. This allows CSPs to use white boxes that are enabled by SDN, as well as open-source components and initiatives. We expect that SDN-based disaggregation, mainly led by a handful advanced CSPs, will start to positively affect SDN software and professional services spending and negatively affect hardware spending towards the end of the forecast period, following the lead of webscale companies such as Google and Facebook and the increasing commitment from major vendors such as Cisco and Juniper.

3 Our definition of a cloud-native function is based on the Cloud Native Computing Foundation (CNCF)’s definition, which includes network functions that are microservices-based, containerised and dynamically orchestrated.

4 The total addressable mobile market for NFV includes mobile core and RAN hardware and software only, and excludes professional services.

5 For more information, see Analysys Mason’s Telecoms vendors must restrategise as Microsoft and AWS team up with operators on public edge computing.

6 WAN SDN is covered in much more detail in Analysys Mason’s Network Automation and Orchestration programme.

Making the case for the true costs, benefits and risks of disaggregation in CSP IP networks