"Vertically integrated operators like to aspire to something more than the condition of ‘dumb pipes’, yet these numbers indicate the unrealised value of precisely that condition."

The volume of FTTP carve-outs and other FTTP transactions has increased dramatically over the past 2 years. Infrastructure investors offer high multiples, on the basis both of strengthening consumer demand and of narrowing scope for other kinds of infrastructure investment, both of which factors are made more acute by the COVID-19 pandemic. These deals have certain similarities to tower deals. Tower multiples are well understood, but there are now enough FTTPco examples to understand how much this market might be worth. This article discusses the drivers of valuation and introduces Analysys Mason’s new FTTP valuation tracker.

It is important to distinguish two, fundamentally different, types of fibreco. 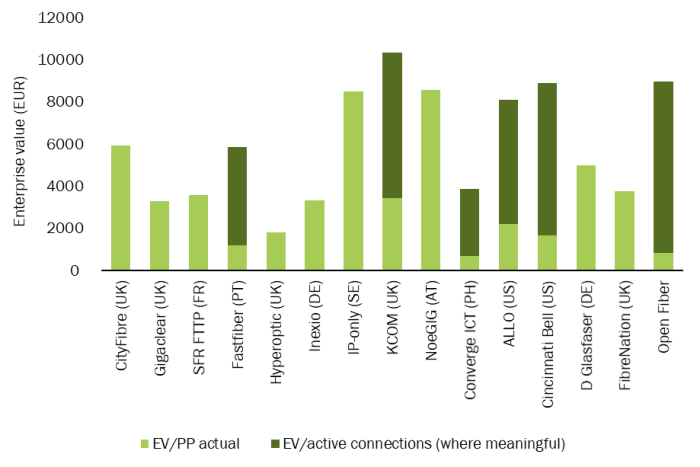 Carve-outs are all either wholesale-only or wholesale-focused. Infrastructure investors generally want a simple model that has low operational overheads and where high long-term occupancy is the goal. Retail-only plays may be worth more per PP, but not necessarily; the higher expected occupancy of wholesale-only networks may make them more valuable. The addition of service layers also dilutes profitability, so any additional valuation ascribed to retail will be proportionately lower than the additional revenue.

Mix of FTTP and other infrastructure

Not all FTTPcos have purely FTTP access networks, especially those that have been in business for many years. A copper PP is a depreciating asset and worth less than an FTTP one. The same seems to be true for HFC. An increasing number of smaller regional cablecos that are facing actual or expected FTTP competition are planning gradually to replace HFC with fibre.

Unlike towers, FTTP is not a mature market. Many FTTPcos have far more premises planned than passed. Planned networks have a value insofar as work already carried out confers a first-mover advantage, and insofar as they confer a cost advantage for build in contiguous areas. Some, like SFR FTTH, will have a degree of exclusivity in planned areas. This additional value greatly inflates the EV/PP figure. The operators closest to a mature state above are:

In a fully mature market, premises connected will become a more important metric than premises passed.

This is the area that makes the greatest difference to valuation. We expect that by 2030 75% of premises in Europe will take an FTTP connection if available. FTTP-on-FTTP overbuild is already a reality in some urban areas, and cable will continue to take share for many years, albeit diminishingly unless it upgrades to fibre. Some greenfield FTTPcos can reasonably expect either a degree of overbuild, or to have to compromise on the scope of build, via access swapping, for example. This may apply to larger altnets such as CityFibre, Deutsche Glasfaser or Hyperoptic. Rural specialists, or SDU specialists, such as Gigaclear, NoeGIG or IP-only get higher valuations.

If we extrapolate these figures to the entire European market, pure FTTP has the potential to be worth 2.5x towers and have revenue some 3x higher than towers. A conservative estimate is EUR1500 per PP for FTTP in mixed deployments (that is, with some threatened or actual overbuild), so the mature-state EV of European FTTP infrastructure might be around EUR375 billion. The addition of potential EV of towers

(EUR300 000 per site × 500 000 sites) means that the total value of these two asset-classes is EUR525 billion. The total EV of European operators (including their non-European assets) was about EUR670 billion at YE2019, so only a fraction higher. Indeed, one of the purposes of carve-outs (in addition to cash generation) is to increase operators’ value because operators consider that the value of their infrastructure is not properly recognised by the market. 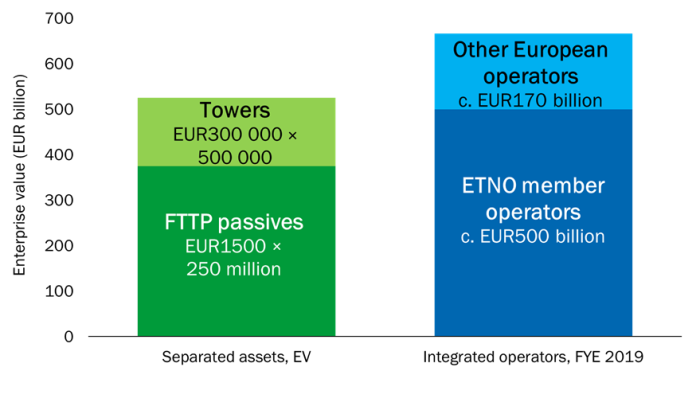 Vertically integrated operators like to aspire to something more than the condition of ‘dumb pipes’, yet these numbers indicate the unrealised value of precisely that condition.