"Partnerships with operators could help Netflix to boost its base of paying subscribers in Africa and engage with the large number of customers in the region who take prepaid mobile tariffs."

Netflix has launched a free plan in Kenya. The company is struggling to maintain its growth trajectory in the rest of the world as major rivals, such as Disney, launch services; Netflix sees improved connectivity and affluence in Africa as a key driver for future growth. In this article, we explore Netflix’s growth prospects in Africa, the opportunities and challenges it faces, and the role of operators in facilitating its growth in the region.

Netflix launched a free service in Kenya in a bid to boost growth in subscriber numbers, which has slowed since 2H 2020

Netflix has sold its services in Africa since 2016. In September 2021, it launched a free plan for Android users in Kenya. The plan does not require payment information, is advertisement-free and supports up to five profiles. However, it comes with a few restrictions:

This is the first time that Netflix has introduced a free tier to attract new subscribers. This approach contrasts with previous strategies such as offering advertising-supported content for free or making small selections of its original content free to non-subscribers via non-Netflix platforms. A parallel could be drawn with the freemium strategies of streaming music services such as Spotify but Netflix’s approach differs fundamentally in that the free plan is not supported by advertising – it is there solely to generate upsell potential for Netflix’ paid-for services.

The COVID-19 pandemic has changed Netflix’s position in the market. Its growth rate for net paying subscribers is falling due to market saturation and increased competition in Europe and the USA. Accordingly, it is looking to Africa and Asia for growth. Netflix added only 5.5 million subscribers worldwide during 1H 2021 compared to 25.8 million in the same period in 2020 (Figure 1).

Netflix is also facing price competition from other global OTT players in developing markets. For example, in India, Netflix launched a USD3-per-month plan in 2018, Disney+ Hotstar introduced a mobile-only plan for USD6.7 per year in July 2021; and Amazon launched a free advertising-supported video streaming service in September 2021 and partnered with Airtel to offer Prime Video for mobiles for USD1.2 per month. 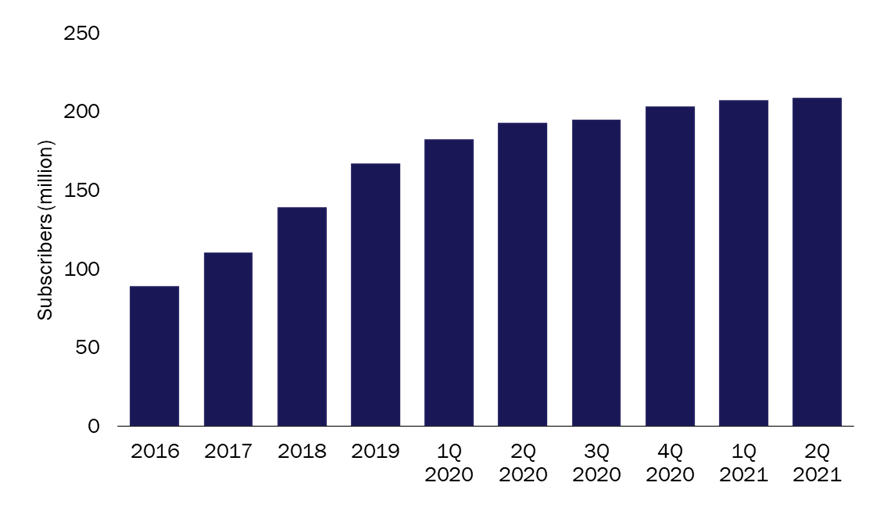 Demand for OTT video will grow rapidly from a small base in Africa as content consumption shifts from linear, offline viewing to on-demand and online. We forecast that Sub-Saharan Africa will have 13.3 million OTT video subscribers in 2025 and spend will reach USD1.4 billion.

Kenya represents an interesting market for Netflix to experiment in for the following reasons.

The primary motivation for Netflix’s launch of a free service tier is likely to be its need to create a positive narrative about an increase in the number of customers for its shareholders. Therefore, its key challenge will be to convert users of the free plan to paying customers later, amidst growing competition from regional and global players that are undercutting it. 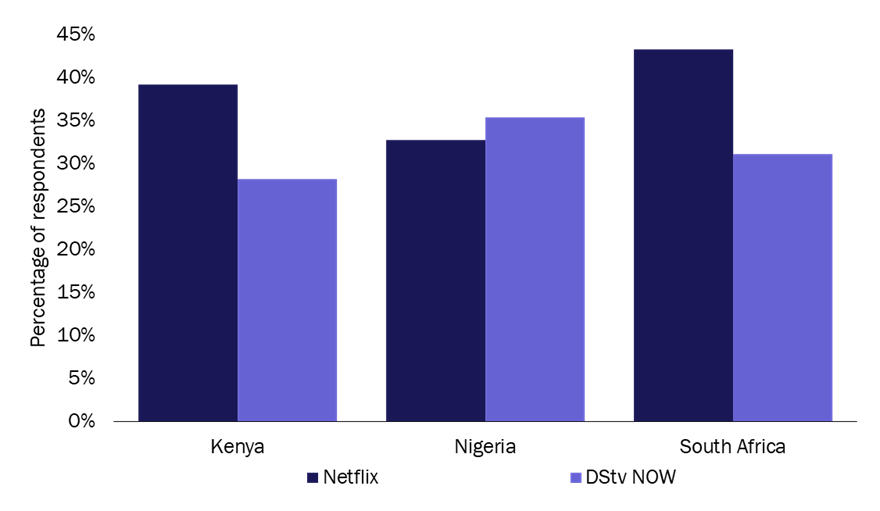 Question: “Please select any of the following paid-for online video services that you use”; n=3000.

It is in both operators’ and Netflix’s interests to stimulate further growth in the use of OTT video services in Africa. African operators may be concerned about the risk of promoting Netflix’s service at the expense of their own nascent OTT video propositions (for example in Kenya, Safaricom launched Baze in May 2021, a mobile-only video-on-demand (VoD) platform that hosts local and regional content; Airtel launched a free TV service that only requires an active data bundle). However, experience from Europe suggests that operators can successfully create retail bundles that combine Netflix’s services with operators’ own services to generate revenue and stimulate take-up. Growing consumption of operator OTT video services helps to create the demand for larger data allowances and higher-speed services, such as 4G and 5G. Operator partnerships will help Netflix to increase visibility and engagement within the country or region and to promote its brand, which will be increasingly important in 2022 when more international entrants launch.

Mobile operators benefit from application-based pricing (that is, zero-rating particular services or allowing, for example, 2GB of inclusive data for Netflix’s services with a particular plan) because it offers a path to upsell more profitable plans, encourages spend and/or helps to improve customer retention. Operators in South Africa have formed such partnerships – both Telkom and Vodacom target high-value postpaid customers in this way. However, engaging with Africa’s significant numbers of prepaid customers will be the next step – and this is where Netflix’s free plan may particularly appeal. In order to maximise the impact, Netflix may need to go one step further – it is common practice in many countries in the Asia–Pacific region for OTT video providers to offer short-term paid tariffs (for example, daily or weekly passes) as a way of encouraging customers to take the more profitable subscriptions.