"Verizon’s plans for 5G FWA make it an extreme outlier in a world where operators are increasingly shifting to a hybrid FTTP-mobile model."

Verizon outlined its post-C-band auction strategy at its March 2021 Investor Day. It said that its greatest new 5G market opportunity is ‘Home’, and it plans to pass 50 million homes with 5G fixed-wireless access (FWA) by 2025. However, FWA risks stressing mobile networks because broadband usage in the USA is, on average, about 40 times higher than handset usage. This article examines the trade-offs of spectrum and sites involved.

At the recent C-band auction, Verizon acquired, on average, 161MHz of C-band, more than doubling its average sub-6GHz spectrum holdings to almost 300MHz. It plans to spend USD10 billion by 2023 on C-band roll-out, and to reach 250 million population coverage and 50 million 5G FWA homes passed (HP) by 2025 (which means that about half of the homes in each cell will not qualify for FWA). Verizon also plans to get mmWave to 31 000 sites by the end of 2021 (1–2 million HP), but it did not indicate further plans. 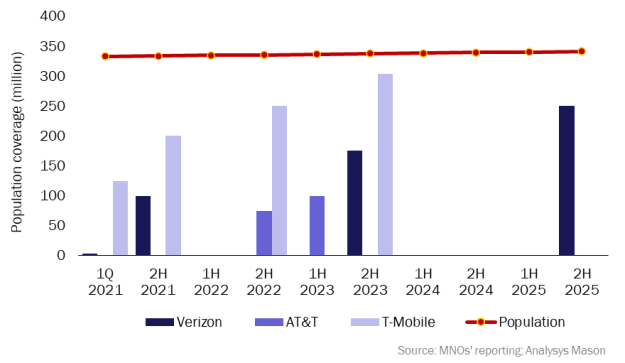 AT&T is placing greater emphasis on FTTP, and T-Mobile is also launching 5G FWA, which indicates that MNOs in the USA are getting more serious about the home, and about fixed–mobile convergence (FMC).

Unless Verizon radically densifies the network, it will have to be cautious about take-up in those 50 million HP. Such is the impact of broadband traffic on mobile networks that Verizon would face a further, heavy capex, even with its new tranche of spectrum.

Verizon currently has about 6 million FTTP subscribers, plus a few 4G FWA and ADSL subscribers, and a small number of mmWave-based ‘5G Home’ subscribers. Verizon serves 33 million homes with mobile services and it aims to convert the majority into broadband subscribers. The company would need well over 10 million FWA subscribers (which equates to over 20% conversion of HP) to achieve this. However, T-Mobile is explicit about its (more modest) ambition for 5G FWA: it is aiming to have 7–8 million subscribers by 2025, and that is with denser macrocell infrastructure and more sub-6GHz spectrum, including 150MHz of 2.5GHz-band spectrum that gives better HP/pop coverage and outdoor-to-indoor propagation than C-band.

Several operators in Europe have 50%+ tie-in of post-paid mobile to broadband, and cross-selling broadband is, as Verizon indicated, simply a matter of adding another line to what are often already multi-SIM family accounts. This appears to be feasible from a retail perspective. What is more questionable is whether anything like this level of FWA take-up is possible without either severely damaging mobile performance or spending much more on densification.

FWA will stress the 5G network

If we assume an average usage of 400GB/month for broadband and 10GB/month for handset mobile, as well as 30% annual growth rate on both, then a 20% conversion rate would mean that by 2025 about three quarters of traffic would be FWA. This is the equivalent of quadrupling the number of mobile subscribers.

This will, of course, be offset by the new spectrum, and by the spectral-efficiency gains of 5G. Assuming steady market-share gain in broadband, and assuming gradual release of C-band carriers over the next 2 years, the loading1 on the sub-6GHz capacity should be bearable. However, without new spectrum that is suitable for the macro-grid, the loading will start to ramp up significantly after that, even assuming that, by 2025, 35% of traffic is offloaded onto mmWave (which would imply vastly more mmWave cells/capex). This is likely to lead to a serious degradation of mobile performance.

mmWave may come to the rescue – but at a high price

In order to counteract degradation of performance from FWA, Verizon could take one or more of the following actions.

Verizon said that ‘over time, 50% of urban traffic will be on mmWave’ and that mmWave is for the ‘densest part of our network’. It estimates that in 2021 mmWave will carry about 5% of mobile traffic. Deploying mmWave at more urban sites will help to alleviate some pressure. However, if it wanted a conversion of 20% of C-band HP, it would need to deploy mmWave much more widely, and in lower-population-density residential areas, because these will become the areas that generate most traffic.

Analysys Mason estimates that Verizon would need to offload 65–75% of all traffic onto mmWave to keep loading stable, and to preserve mobile performance. Verizon said that it expects capex intensity to drop after 2023, but in order to drive its target level of FMC, it will need to continue to spend heavily on mmWave offload for many years.

From a global perspective, Verizon’s and T-Mobile’s ‘mobile-centric convergence’ approach looks increasingly eccentric. This approach also contrasts with that of AT&T, which said it sees only limited use cases for FWA, and that it could roll out 4 million FTTP HP per year (from 14 million now) until 2025.

Each of these company’s incentives to capture broadband subscribers will be very different. Once an operator has built FTTP, it is absolutely incentivised to convert all HP to subscribers. With C-band-based FWA, an operator would be incentivised to keep the conversion rate under control – or to build out a new, densified capacity layer to meet demand, and even then have a network that would underperform FTTP and DOCSIS3.1. If the future of consumer telecoms in the USA lies in FMC, then – despite ending up with the smallest sub-6GHz spectrum holding – AT&T’s hybrid fibre-wireless approach places it in the strongest position among the big-three operators.

1 Loading = traffic divided by spectrum*sites, also factoring in efficiency gains. This is discussed further in Analysys Mason’s Towards the end of capacity constraints: traffic, spectrum and site density in the 5G era.