"The race to the bottom for FTTH pricing is on, and speed-based pricing could collapse, as was seen for ADSL."

Swiss mobile operator Salt, one of Xavier Niel’s four main operations in Europe, entered the fixed broadband market in March 2018 with a headline-catching 10Gbps consumer offer that breaks the mould of FTTH pricing. It is interesting because it is one of the first commercial XGS-PON networks in the world, but it is important because it relies on a form of fibre unbundling. This comment looks at the broader implications of this offer in other markets.

At a retail level, the offer is simple. For CHF49.95 per month (a Swiss franc having, at the time of writing, the same value as a US dollar), end users get a symmetrical 10Gbps connection, a home gateway, an Apple 4K TV box and an HD voice service. If they are already a Salt mobile subscriber, they get it for CHF39.95 per month. Activation costs CHF99.95 and (optional) installation costs CHF199.95. That is all that is available; there are no other variants on offer. This characterises Niel’s approach to product portfolios.

The discrepancy between Salt’s package and other triple- and quad-play offers is astonishing. At the time of launch, other FTTH providers in Switzerland charged between CHF139 and CHF210 for quad-plays with unlimited mobile data. Salt charged CHF64.90 for a promotional period, rising to CHF99.90. Swisscom’s equivalent 1Gbps triple-play cost CHF130 per month, 160% higher than Salt’s offering.

Is there any point to 10Gbps?

The service is based on a shared-capacity PON, but with normal patterns of usage, any user should get all but 10Gbps nearly all of the time, and the service is currently marketed as 10Gbps symmetrical. Swiss consumers are probably not going to quibble about the usefulness of 10Gbps if it is less expensive than slower services, but this is still a reasonable question to ask.

The Salt home gateway has a 10Gb Ethernet (10GE) port, but to benefit from 10Gbps on any individual device (which itself would cost a premium), a consumer would also need to have a 10GE wired connection to the gateway, as even 802.11ac Wi-Fi will not attain this speed. So why would anyone want this? One cannot begin to justify 10Gbps based on multiple simultaneous streams of video. Marketing that tries to differentiate high-end FTTH speed/price tiers based on customer segmentation (multi-screen households, committed gamers and so on) is mostly nonsense and service providers know it. Salt, in any case, circumvents this marketing issue because it only sells 10Gbps. The real benefit lies in the utility of uploading and downloading quickly. A 50GB 4K game would take over 2 hours to download on a 50Mbps connection, but just 40 seconds on a 10Gbps connection, assuming, that is, that the bandwidth is available end-to-end.

Another way of looking at the issue of demand for speed is to separate the maximum speed that operators must market to remain competitive and the ‘comfort speed’, defined as the speed below which usage is constrained. The former is creeping towards 1Gbps in Europe and North America, but is already 10Gbps in some parts of Asia. Its CAGR is about 55%, but growth is lumpy. Several studies have shown that there is an inflexion point where usage (GB per month) flattens out as speed increases. In much of Europe, this is probably now at about 50-60Mbps. The CAGR of this metric is about 45%.

The emergence of fibre LLU, competitive wholesale and the race to the bottom

Salt’s is the first widely-available 10Gbps service in Europe, and it is also the first commercial XGS-PON in Europe. Asymmetrical XG-PON (10Gbps down, 2.5Gbps up) services have been available for a while in Asia, but it is only this year that we have seen commercial launches of the symmetrical variant; the asymmetrical version is already obsolescent.

The critical factor in the pricing is the fact that it is based on physical fibre unbundling. Salt has not built any FTTH, it has simply leased unlit fibre from Swiss Fibernet, a utility-owned independent wholesale-only operator that covers about 30–40% of Switzerland. Since the wholesale charge is independent of bandwidth, the retail price can fall towards the monthly cost of the physical link plus the additional cost of the active equipment. XGS-PON residential gateway ONTs are probably 3 times more expensive than GPON ONTs (USD100–150), and hence the one-off charges for the Salt service are high. This is of course closer to the true underlying cost of FTTH than the steep bandwidth-based price differentiation of wholesale, and therefore retail, PON bitstream.

Hence what is happening in Switzerland (which now has two major FTTH wholesalers, Swisscom and Swiss Fibernet) is a replay of copper unbundling and the impact that that had on broadband pricing in the early 2000s. In France, for example, speed-based price differentiation on copper was effectively ended by LLU (see Figure 1). Exactly the same thing happened in the UK. 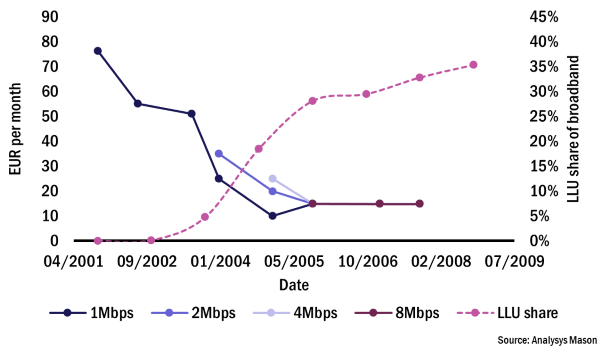 Physical layer unbundling on FTTH is available in only a few markets, typically for incumbents with PTP networks. However, new competitive wholesale-only FTTH builders may adopt a model that allows both bitstream and physical unbundling. Open Fiber in Italy and Swiss Fibernet are early examples of this, and one might reasonably ask how and what CityFibre will sell to Vodafone, and how and what Infracapital would sell to TalkTalk. It is easy to see why ambitious service providers with the potential to obtain a high market-share (like MNOs) would prefer this model to the usual incumbent offer of bitstream (VULA) only.

Xavier Niel made his money in exploiting copper unbundling with Free (Iliad) in France. He owns operators in three other countries, and all have some potential to follow Salt’s lead.