"The Great Recession during 2007–2009 did not dramatically change the trajectory of telecoms operators’ revenue in Western Europe."

The COVID-19 pandemic is likely to have severe negative economic repercussions across the globe. However, it is unclear to what extent telecoms operators will be affected by this economic crisis in the long term. It is likely to have a limited negative effect on telecoms operators’ consumer revenue in the short term while lockdown measures are in place around the world. Fixed-line traffic has generally increased, and while this may not drive revenue growth, it reinforces the value of a home broadband connection in both the short and longer term. Mobile data traffic has also increased, even in countries with high wireline broadband penetration.

Analysys Mason is not a macroeconomic forecaster and so cannot predict the extent and duration of the global downturn. However, we are able to look at the impact of previous economic crises on telecoms operators’ revenue and in this way, we can try to gauge what the impact of a COVID-19-induced recession may be. This comment examines the effect of the Great Recession of 2007–2009 on telecom operators’ revenue.

One way of looking at the macroeconomic impact of the Great Recession on telecoms operators’ revenue is to observe when the biggest percentage declines in revenue were. The decline in GDP during the Great Recession helps to explain why the unweighted average year-on-year consumer fixed residential retail revenue decline in Western Europe was the greatest (–2.8%) in 2009. In addition, the potential for fixed voice revenue to fall further was lower in later years, and the potential for growth in the number of fixed broadband subscribers remained. In some countries there was somewhat of an upward trend in fixed broadband ASPU (or at least reductions in the rate of decline), both through price rises and migration to higher-speed, more-expensive next-generation access (NGA) offers.

The same pattern did not apply in the mobile market. Here, the unweighted average consumer mobile residential retail revenue in Western Europe declined the most in 2013 (8.8%, compared to 2.6% in 2009). Mobile residential retail revenue was still growing year-on-year in the years prior to the Great Recession, partly because operators could continue to rely on growth in the number of subscribers. Since 2015, there has been some easing of the competitive environment and mobile retail revenue has stabilised.

The Great Recession improved the prevailing dynamic in terms of consumer mobile retail revenue as a percentage of GDP in Western Europe (Figure 1). This figure was declining in most Western European countries before 2007, but improved during 2007–2009 and the unweighted average across all countries was very slightly higher in 2009 than in 2007. Since 2009, mobile residential retail revenue as a percentage of GDP has fallen once more. The number of customers in the mobile market remained stable during 2007–2009, unlike that for other consumer industries. People did not cancel their mobile contract or stop using prepaid mobile entirely as a result of the Great Recession. Indeed, the total number of mobile SIMs (excluding IoT SIMs) in Western Europe increased by 5.9% in 2008 and 3.3% in 2009. 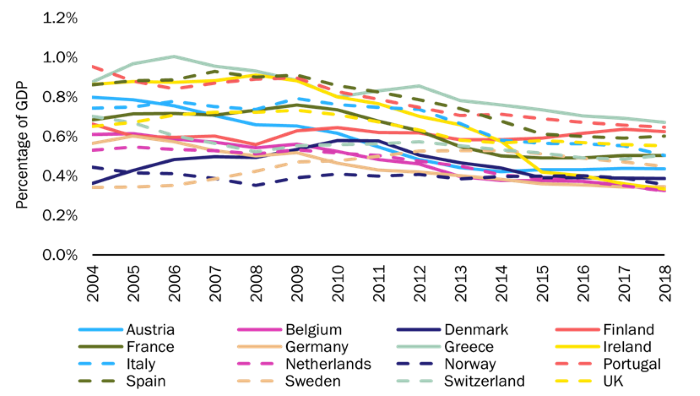 The decline in fixed residential retail revenue as a percentage of GDP was most pronounced during 2004–2007 (Figure 2). The figure in 2009 was lower than that in 2007, but the fall was most significant before the recession because there was more potential for fixed to mobile voice substitution and fixed voice revenue declines. 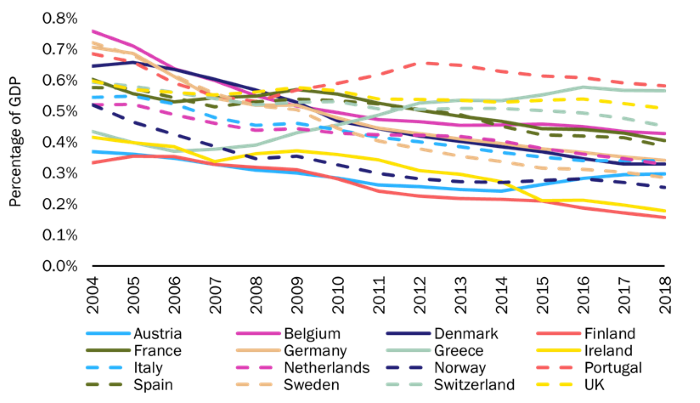 The economy in Greece was one of the worst affected by the Great Recession. However, consumer fixed residential retail revenue as a percentage of GDP actually increased in Greece from 0.38% in 2007 to 0.43% in 2009. Similarly, in Ireland, this figure rose from 0.34% in 2007 to 0.37% in 2009. Even during the prolonged economic crisis, the number of fixed broadband subscriptions in Greece increased, and fixed broadband household penetration was the third highest in Europe at the end of 2018. It is logical to say that people are more likely to stay at home during an economic crisis, and therefore they will find more utility from having a fixed broadband connection. The mobile segment in Greece did not follow the same trend. Indeed, the drop in consumer mobile residential retail revenue as a percentage of GDP between 2007 and 2009 was greater in Greece than in any other country in Western Europe.