Acquisition has become the standard model to boost enterprise revenue


"If incumbent operators want to grow their enterprise business, they do not have many options other than acquisition."

A standard growth model has emerged in the enterprise market for incumbent operators in high-income countries:1 the operator acquires IT and cloud service providers to add the people and processes that its existing teams lack. Elisa, KPN, Orange, Swisscom, Telia, Telstra and others have all followed this acquisition model, and these deals are having an obvious, near-term effect on revenue growth. The challenge for enterprise divisions will be to turn these short-term increases in revenue into sustainable longer-term growth. Despite the risks associated with acquisitions, falling connectivity revenue means that operators do not have many other options if they want to grow their enterprise businesses.

Operators are attempting to take a greater share of domestic markets

Perhaps the most-extreme example of an operator buying into the IT services market is Telia Finland. Between July 2017 and March 2018, it bought four companies, spending over EUR250 million in the process. To put that EUR250 million figure into context, in Finland, Telia's total revenue for 2017 was EUR1.3 billion and its revenue from 'business solutions' was EUR187 million.

All of these acquisitions were of Finnish companies and are part of a broader trend: incumbents are focusing their attention on the domestic market and trying to take a greater share of the local economy. Telia is selling off international assets to concentrate on a smaller number of European countries. KPN has also narrowed its focus, divesting its international wholesale division, reducing its exposure in Germany and selling its Belgian mobile arm. As part of this focus on the Netherlands, KPN has made seven enterprise acquisitions, all of them Dutch. Swisscom has made three Swiss acquisitions and taken majority stakes in two other IT services companies.

The press releases for these deals mention a common set of services – public/private/hybrid cloud, security, application support and development and other managed services. Operators are mostly focusing on generic IT services that can be sold to enterprises, regardless of their sector or vertical market. Healthcare is the only vertical market mentioned by more than one operator. KPN, Swisscom and Telstra have all bought healthcare technology companies.

Though not stated explicitly, many acquisitions are about gaining employees. Most of the press releases announcing acquisitions generally do not state how much a deal is worth or clarify the revenue of the company that was acquired. However, in many cases, the press releases highlight the number of employees acquired, which is a revealing piece of information. Figure 1 shows the percentage of employees added through enterprise-related acquisitions. If anything, these figures underestimate growth in the number of employees because they only include deals where the number of people was mentioned in the press release, and do not include organic expansion, which is also significant. For example, Orange announced in mid-September that it was planning to add 300 more 'cloud experts' in 2018. 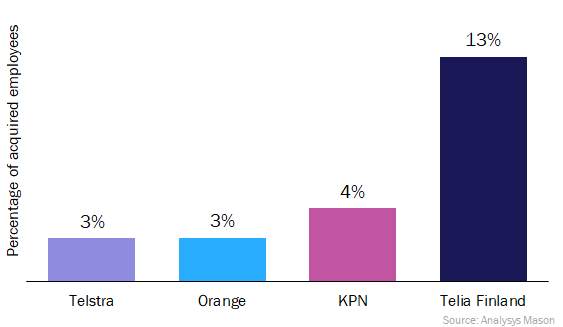 At a time when operators are laying off a large number of employees in an effort to cut costs, there is one division that is adding literally hundreds, and in some cases thousands, of people to the payroll.

Acquisitions are having a positive impact on operators' revenue growth

As shown in Figure 2, operators that report the split of ICT and non-ICT revenue are, on average, growing ICT revenue faster than connectivity revenue. ICT revenue increased by 6.7% compared with a decline of 3.4% in non-ICT revenue. ICT growth is helping to balance declines in the connectivity business. Part of this growth is simply down to acquisition. For example, KPN and Telstra both made acquisitions relating to their ICT businesses in during the second half of 2017 and the first half of 2018 and this will boost their revenue figures.

The results for operators that have not made significant recent acquisitions (for example, Proximus and Telefónica) are also encouraging though, with strong organic growth in ICT revenue.

There are obvious risks related to these acquisitions, such as losing key staff and customers. For example, an employee of a 150-person services company may find the idea of working for a large incumbent operator unappealing. Founders, in particular, may not want to stay. In addition, customers of these small services firms may not wish to give their business to larger operator such as KPN or Telstra.

However, operators are trying to mitigate some of the risks associated with acquisitions, for example, by maintaining the companies as separate brands with their own identities, and by giving them some degree of autonomy. There are also examples of operators that have successfully moved into new areas based on acquisition, such as Vodafone's Automotive business. Its EUR145 million acquisition of Cobra in 2014 has given it a base on which to build an extremely strong automotive business with 18 million connections today.

The real test of success, though, will not be based on how well these acquisitions perform as autonomous entities, but instead on how well operators can integrate and cross-sell newly acquired services to their existing customer base, which is probably their key asset.

Acquisitions are clearly a risk for operators and it is easy to be sceptical of their chances of success. However, theoretical arguments for and against M&A probably miss the point; if incumbent operators want to grow their enterprise business, they have little choice but to do more in IT. This move into IT services may be difficult for all sorts of reasons and some operators may fail, but there are few alternative options. Operators can be encouraged by the positive revenue growth for those that made acquisitions, as well as the potential for developing products that are attractive to a wide range of customers, which will provide ample opportunities to cross-sell.