"The latest generation of iPhone will provide an instant boost to the number of 5G connections across most developed countries."

On 13 October 2020, Apple announced the long-awaited release of its 5G-enabled mobile devices, which will be available in four models from late October and November (depending on location and model type). 5G technology is still at an early stage in most markets and flagship devices such as the iPhone 12 are critical for its success. This comment explores how the iPhone 12 will change the 5G landscape and considers whether its functionality provides an insight into future 5G services.

The headline specification upgrade in the latest iPhone generation is that all models are 5G-ready and can access a greater number of 5G bands than competitors’ handsets. The models released in the USA will be able to access mmWave bands at no extra cost and, similarly to Huawei’s flagship 5G smartphone, all devices will be able to access the n28, n77, and n79 bands, which offer strong performance benefits in Europe. Further upgrades include improvements to camera quality and screen resolution, as well the inclusion of an A14 Bionic chip, which Apple claims has the fastest CPU and GPU in the market (up to 50% faster than the competition) and will enable ‘console-quality’ gaming experiences. The premium iPhone 12 Pro models (retailing at USD999 and USD1099) also contain a LiDAR sensor, which enables 3D object recognition to support a range of AR applications.

Apple continues to prioritise a smaller form factor and the new iPhone models use a smaller battery than other flagship devices. Apple has addressed the issue of potential 5G power drain with its ‘Smart Data’ feature, which manages the trade-off between power consumption and connectivity requirements by defaulting to 4G for connectivity and then switching to 5G when more bandwidth is needed. This makes Apple’s endorsement of 5G somewhat ambiguous; mobile operators will want their customers to see the 5G icon at the top of their screens as often as possible.

5G remains a nascent technology worldwide, with the markets in China and South Korea among the most advanced in terms of subscriber take-up. Operators in these countries have noted that the launch of new 5G devices will result in a step-change in 5G take-up. The iPhone is typically the single-most significant device launch and 5G operators around the world will have high expectations for the device. 5G penetration in Android-dominated South Korea stood at 11% of smartphones in July 2020. KT reasserted its target of 25% 5G take-up by the end of 2020, stating that the latest iPhone and Samsung Note devices are vital to achieving this.

Apple’s smartphones account for only 15% of the smartphone shipments worldwide, but the company has a much higher market share in many developed markets. For example, Apple accounts for over 40% of all smartphones in Australia, Japan, the UK and the USA. Apple has a strong presence among premium consumers who represent a large proportion of potential early adopters of 5G plans. This demographic is considered to be critical for the success of 5G in Middle Eastern countries such as Kuwait, Saudi Arabia and UAE, where the lack of a 5G iPhone has hindered 5G’s progress. The shorter average device lifetimes of Apple products (due to a range of upgrade programmes offered by both operators and Apple themselves, along with a loyal customer base) means that the launch of the new devices should have an immediate effect on 5G penetration. We therefore expect the launch of the iPhone 12 to have a significant effect on 5G device take-up worldwide and will be the main driver of penetration in markets where Apple dominates the premium segment.

We forecast that 5G’s share of handset connections in the USA will increase to 10% of devices by the end of 2020 (up from 1% in December 2019), driven by final-quarter sales of iPhone 12, and by 2024, 5G will account for 67% of total handset connections. In Western Europe, slower handset cycles and disparities between markets (for example, 5G has not yet been launched in some countries) will result in weaker 5G penetration, but iPhone-dominated markets such as the UK will drive a surge in 5G connections. 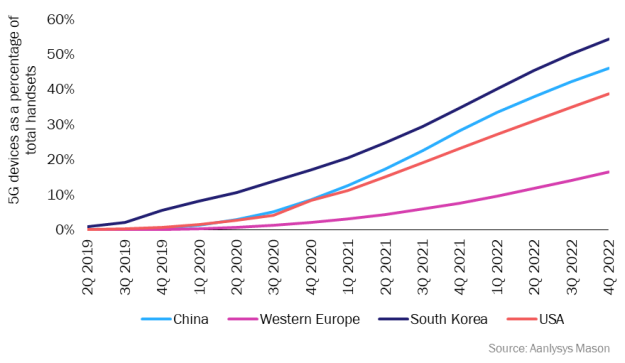 5G-specific use cases will have niche appeal in the short term, despite upgrades to hardware

Apple’s status as a market maker in consumer technology means that operators will be interested in how the company is positioning its 5G capabilities. The segment of the iPhone 12 launch presentation covering 5G concentrated on enhanced network speed and capacity, along with enhanced video applications, such as multi-screen live sports. These use cases will benefit from improved throughput and reliability offered by 5G, but cannot be described as major differentiators for new-generation networks.

However, some of the frequently cited, major 5G use cases are addressed by the launch of the iPhone 12 and provide an insight into how operators may be able to monetise new services in the future. For example, Apple’s continuing focus on augmented reality (AR) functionality is evident in the iPhone 12 Pro’s LiDAR feature, which enables instant AR for far quicker processing of data. This has ramifications in terms of potential 5G AR use cases and is perhaps a precursor to LiDAR-enabled smart glasses.

Similarly, the enhanced processing power enabled by the A14 bionic chip will enable greater gaming performance and because 5G can support much-improved latency over 4G, mobile gaming will be more responsive. These 5G-enabled improvements to gaming performance, coupled with hardware upgrades, mean that the use case for both local and cloud gaming is stronger. Many operators are already active in this area, mainly through partnerships, and will be pleased to see the proposition getting support from Apple.