COVID-19: operators in the UAE should prepare for a gradual lift of the ban on VoIP apps after the crisis


"Operators in the UAE must develop adjacent revenue streams to pre-empt the increased competition from OTT players."

Telecoms regulators in Oman and the UAE lifted the ban on selected OTT VoIP and video conferencing apps (including Skype for Business and Zoom) in March 2020 to enable people to work and study from home in compliance with the social distancing guidelines brought in to combat the COVID-19 outbreak. However, popular consumer OTT apps such as WhatsApp and Skype were excluded from the list of authorised apps.

The exceptional measures taken by the regulators are likely to last for at least a few weeks. The pressure from the public to extend this period and expand the list of permitted applications will increase, especially in the UAE. In this comment, we share results from Analysys Mason’s Connected Consumer Survey regarding the penetration of OTT services in the UAE, and argue that operators in the country should do more to prepare for the possibility of increased competition from OTT players post-crisis.

OTT communications apps remain very popular in Oman and the UAE, despite regulators’ attempts to block or disrupt them

Telecoms regulators in Oman and the UAE have adopted a strong defensive stance against OTT players by blocking the voice and video calling features of most OTT communications apps. In contrast, regulators in other countries in the Gulf Co-operation Council (Bahrain, Kuwait, Qatar and Saudi Arabia) have gradually allowed more OTT apps to be used, including WhatsApp.

Operators in Oman and the UAE have enforced this ban while partnering with third-party OTT service providers, such as BOTIM, to offer app-to-app calling tariffs (in the UAE) and OTT apps for making international calls (such as Ooredoo Talk in Oman). However, these apps require customers to be connected to their operator’s mobile or Wi-Fi network.

There have been calls to lift the ban on popular voice and video calling apps to enable residents to communicate with their friends and families and to allow businesses to use video conferencing applications. Some consumers and some businesses have resorted to using virtual private networks (VPNs) to bypass these restrictions.

The use of OTT services in Oman and the UAE is widespread, despite these restrictions, according to our survey of 4500 smartphone users between August and September 2019. WhatsApp remains the dominant application (63% of respondents in Oman and 70% in the UAE used this app), but others are gaining traction (Figure 1).1

Figure 1: Penetration of the most-popular OTT communications apps in Oman and the UAE, 2019 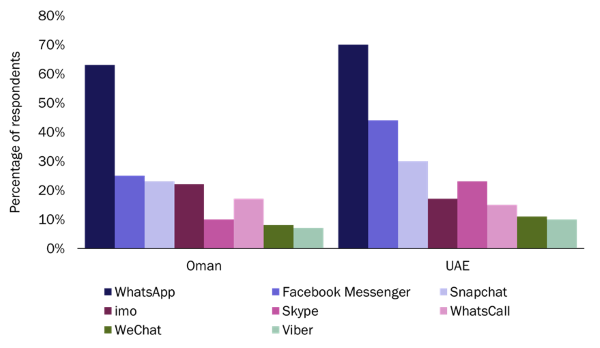 The Telecommunications Regulatory Authority (TRA) in Oman and the UAE announced in March 2020 that some video and voice calling apps would be temporarily made available to help employees to work remotely and to enable students to access online classes because most of the population must stay at home to curb the spread of COVID-19. Operators have also offered free local and peer-to-peer calls to support the population (Figure 2). However, the ban on consumer OTT apps such as WhatsApp and Skype has been upheld.

Figure 2: Initiatives from regulators and operators to facilitate voice and video communications during the COVID-19 crisis, Oman and the UAE

TRA UAE appears to be more-open to relaxing the regulations on OTT apps than the Omani regulator. TRA UAE had discussions with Apple and Microsoft in 2018 regarding easing the restrictions on their consumer apps (FaceTime and Skype, respectively), but it appears that they did not reach an agreement. The TRA allowed the locally developed OTT app, ToTok, to be used to make free voice and video calls over cellular and broadband lines in 2019. The app was later withdrawn from the Apple store and Google Play due to privacy issues, but it remains popular among residents of the UAE and the regulator still permits its use.

The ToTok experiment demonstrates that there is a large unmet demand for voice communication in the UAE. The regulator might find it difficult to reverse its decision and block all OTT apps again once consumers and businesses have become accustomed to using them. Operators in the UAE should therefore be prepared for select OTT apps to be permitted and for an accelerated decline in their revenue from international calls.

In preparation for this shift, operators could, for example, increase their voice allowances, especially for on-net calls, and focus instead on data allowances in their tariffs (as is the case in Kuwait and Saudi Arabia). Operators could also consider offering service-based data tariffs with allowances dedicated to OTT voice and video usage as extensions to current social add-ons. Ultimately, these measures will only help to partially offset the decline in revenue from legacy voice and will not be enough for long-term growth. Operators should therefore step up their efforts to diversify their revenue streams from non-core services such as gaming and ICT, and seek the right partners to implement and monetise future 5G use cases.

1 Further analysis will be included in an upcoming report from Analysys Mason titled Connected Consumer Survey 2019: OTT communication services in the Middle East.

As COP27 closes, CSPs can help consumers to address concerns about both the cost of living and the environment