"Integrating SME sellers into an app and scaling up the app’s service portfolio may allow Facebook and Reliance Jio to gain a substantial share of consumer attention."

In late April 2020, Facebook announced its intention to invest INR435.74 billion (USD5.7 billion) for a 9.99% stake in Jio Platforms (the parent company to Reliance Jio, India's leading mobile operator) and, in a related move, to link up WhatsApp and JioMart (Reliance Industries’s click-and-collect e-grocery platform). This tie-up presents the two players with a joint opportunity to launch a super app (as reported by insider sources)1 that can help to mobilise India’s growing digital economy. The effects of this deal on other Indian telecoms operators and the broader digital sector in India are likely to be significant. In this comment, we review the drivers of this deal and the potential impact on telecoms players and others.

There are various reasons behind Facebook’s tie-up with Jio Platforms (Figure 1).

Figure 1: The individual and collective drivers behind the deal between Jio-Platforms and Facebook in April 2020 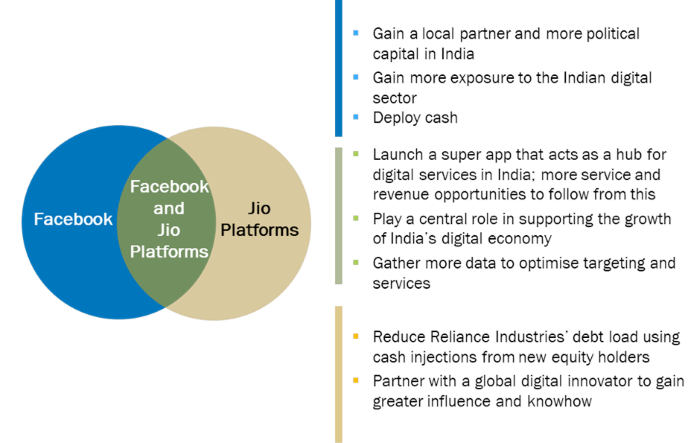 The impact on the telecoms market in India and the broader digital sector is potentially significant. For Reliance Jio, opening up its services to new customers may lead to revenue gains. Increasing its service range – or ultimately operating a super app – can help Reliance Jio to reduce mobile churn and to further build mobile ARPU, which stood at INR127.01 (USD1.83) as of 2019 – 10.1% above the market average. The tie-up with Facebook is also a boost to Reliance Jio’s ambitions as a B2B digital enabler and a digital lifestyle company. This move is likely to put pressure on Jio’s competitors, but it is not clear what impact it will have on the level of mobile market competition as a whole in India, which is increasingly an area of concern given Vodafone–Idea’s financial troubles.5

This deal may enable Facebook to realise its ambitions to have a stronger presence in India, but it remains unclear what relationship it will have with local authorities. The forthcoming Personal Data Protection Bill in India may impose high compliance costs relating to data localisation among other things. Furthermore, local sources report that the government in India is mulling new taxes for big tech companies.6 At the same time, in addition to gaining a useful local partner in Reliance Industries, Facebook will have won some goodwill from local authorities given the timing of its investment and the way that its aims correspond with the government’s ‘Digital India’ vision. The key, as-yet unanswered question is whether these new advantages will be sufficient to enable Facebook to operate its business with limited regulatory obstacles.

The benefits of this move will take time to materialise, but other operators in India and elsewhere may seek to partner with big tech

Facebook’s investment in Jio Platforms provides an interesting example of a big tech company investing in a telecoms company. Elsewhere, big tech companies typically compete with telecoms operators. India is a relatively unusual case because of the significant growth opportunities for the digital economy as well as the role that telecoms operators such as Reliance Jio play as central enablers of the digital economy. Operators in other countries are likely to view partnerships with tech companies as attractive, but the opportunities to form such partnerships are potentially more limited. It is not yet clear how Reliance Jio’s competitors will respond. To compete more effectively, a similar tie-up with a technology company is likely to now be higher on the agenda of Indian telecoms operator Bharti Airtel (Airtel), which has clear ambitions in both the financial services and digital services sectors, and Vodafone Idea. At the time this was published, Google was reportedly considering buying a 5% stake in Vodafone Idea.7 Given the size of the digital economy opportunity, there is likely to be room for more than one operator to succeed, even if the benefits of the deal between Reliance Jio and Facebook are yet to materialise.

7 Tech Crunch (May 2020), Google and Microsoft reportedly considering stakes in telecom firms in India after Facebook deal. Available at: https://techcrunch.com/2020/05/28/google-vodafone-idea-microsoft-reliance-jio-platforms-facebook-deal/.