TIM and Vodafone Italy announced an enhanced passive and active mobile network sharing agreement to support 5G roll-out. As a key enabler of this strategy, the two MNOs were considering whether to combine the INWIT and Vodafone tower portfolios into a new towerco which would own the 22 100 sites. Analysys Mason was engaged as strategy adviser to support INWIT on all commercial and technical aspects of the negotiation process.

We deployed a highly skilled senior team with deep knowledge of both the tower industry and the Italian market. Our team took part in negotiations with Vodafone’s management and advisers, supported INWIT to develop a long-term view of its business plan and, in parallel, conducted commercial and technical due diligence of Vodafone Towers:

Our work to assess/quantify the synergies from the business combination and to analyse the passive/active common grid proposed by Vodafone and TIM developed important inputs for the negotiations. Finally, we provided inputs for negotiation of the master service agreement (MSA) with the anchor tenants and conducted an independent review of the business plan of the new towerco entity (INWIT + Vodafone Towers).

Figure: Infrastructure sharing situation in Italy after the deal 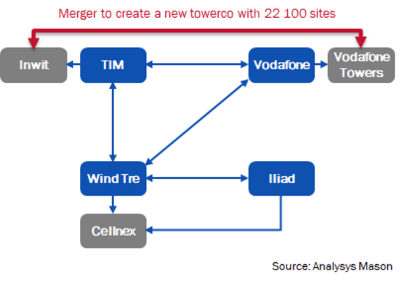 Analysys Mason’s analyses were used in several workstreams of a complex process that involved multiple parties (for example, business plan, negotiations, MSA and synergies). Our work was instrumental in helping INWIT to maximise the value of the transaction. In July 2019, the parties announced that they had finalised the network sharing partnership and the combination of the two towercos (at the time of writing the deal was subject to regulatory approval).

Our work was instrumental in helping INWIT to maximise the value of the transaction.

We deployed a highly skilled senior team with deep knowledge of both the tower industry and the Italian market.

Analysys Mason is the leading adviser on telecoms and broadcasting towers having completed over 100 strategy and M&A projects since 2014.